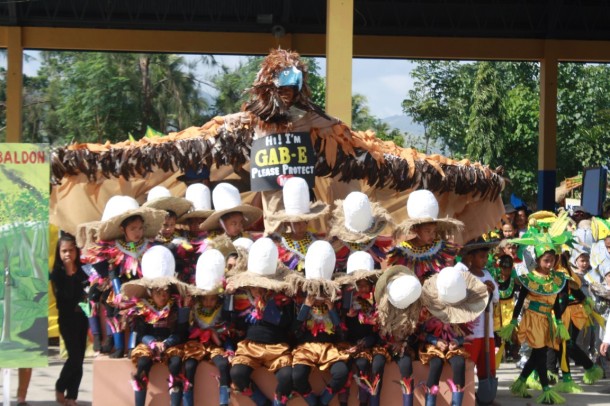 A Philippine Eagle spotted in Mt. Mingan was named Gab-E by residents of nearby Gabaldon in Nueva Ecija, a province known to be the “rice bowl of the Philippines.”

Nueva Ecija, Philippines – The Municipality of Gabaldon in Nueva Ecija is celebrating the town’s sustained bountiful produce in its 6th annual harvest fest dubbed the Gulayan Festival in January 21 to 25, 2017.

Started in 2012, the good harvest festival exhibits the rich cultural traditions and natural resources of Gabaldon. Locals showcase the native produce of the town through colorful parade floats creatively decorated with vegetables such as eggplants, tomatoes and onions, as well as fruits and handcrafted ornaments.

In the previous years, some local and foreign tourists flocked the venue as street dancing parties, talent showcase, trade exhibits and band parades were held.

A Gab-E float pulled by a farming tractor during the 5th annual Gabaldon Gulayan Festival. Photo by Gabaldon LGU.

Gabaldon is an agricultural town with over 56% of its total land area devoted to farming purposes. Nueva Ecija is the largest province and the biggest rice producer in Central Luzon.

The festivities are a celebration of thanksgiving and prayers for a bountiful harvest in honor of the feast of Saint Paul the Apostle. Communities, students, local leaders, churches, government and non-government agencies partake in the fun-filled celebration.

Besides the showcase of native crops, some participants also brought awareness advocacies related to the environment and eco-friendly agricultural practices.

Environmental group Haribon Foundation joins the Gulayan Festival for the first time to bring to attention the importance of protecting the critically endangered Philippine Eagle in helping ensure a healthy biodiversity in Gabaldon and its vast fertile soil.

In 2014, Mount Mingan has been declared a protected sanctuary after Haribon researchers confirmed in an expedition the discovery of an adult pair and a juvenile Philippine Eagle – the latter fondly named by the community as Gab-E (Gabaldon Eagle).

Birds provide an exciting window on nature. BirdLife International explains that because birds like the Philippine Eagle are incredibly sensitive to environmental changes and most are relatively easy to monitor, they can help determine biodiversity crisis or how well a forest ecosystem is doing.

Biodiversity is essential to healthy ecosystems that ensure food security and sustain our livelihood. Farming provides the food we depend upon on a daily basis. Simply put, data about birds can help in the development of eco-friendly farming practices.

To this day, the protection of the Mingan Mountains where the Haring Ibon (King of Birds) dwells continues strong through the support of the municipalities of Gabaldon, Dingalan and San Luis. Unfortunately, the degradation of natural habitats that threaten endangered species such as Gab-E persists in many other regions.

Haribon’s Philippine Eagle Project is funded by the German Agency for International Cooperation (GIZ) under the Protected Area Management Enhancement (PAME) and Zoological Society of London (ZSL) – EDGE program, in partnership with the Department of Environment and Natural Resources (DENR), the municipality of Gabaldon and the National Commission on Indigenous Peoples (NCIP).

The participation of Gab-E in the Gulayan Fest also hopes to drumbeat Haribon’s bigger awareness campaign on the Philippine Eagle in June.

The Gulayan Festival is made possible by local governments, the Department of Education, barangays, churches, the police and other supporting organizations.

Haribon Foundation for the Conservation of Natural Resources, Inc. is a membership organization committed to nature conservation through community empowerment and scientific excellence. Hatched in 1972, it is the pioneer environmental organization in the Philippines. It’s natural and social scientists work with communities and people from all levels governance to promote biodiversity conservation.

Act. Make an Impact. Protect, Conserve and Save Biodiversity. Be a Haribon member today. Register: bit.ly/joinHF and e-mail to membership@haribon.org.ph. SIGN UP NOW! 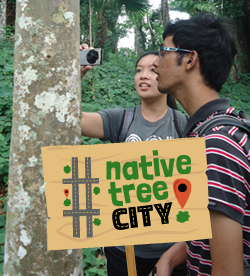 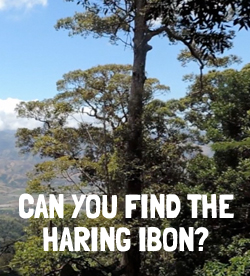